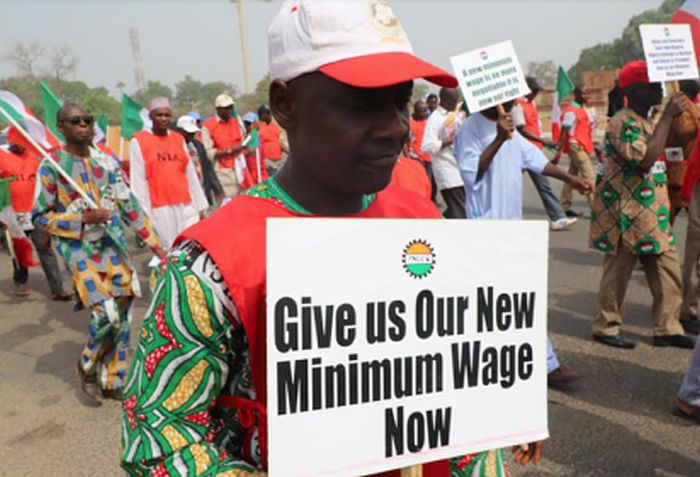 The Nigeria Labour Congress, NLC, has declared an “immediate industrial action” in some states that have failed to pay the N30, 000 new national minimum wage.
NLC lamented that about half the states in the country were yet to conclude negotiations on payment of the minimum wage.

The Congress’s directive was contained in a communiqué issued at the end of the National Executive Council, NEC, and was jointly signed by the NLC President, Mr Ayuba Wabba and General Secretary, Mr Emma Ugboaja.

NLC insisted that the refusal of states to pay the minimum wage was an act of criminality, and a betrayal of their oath of office.

“The NEC also resolved to view the refusal to pay the new national minimum wage by state governments as demanded by the law as an act of criminality, betrayal of the oath of office sworn by state chief executives and a dangerous adventure in anarchy.

“The NEC-in-Session directed all states where the national minimum wage of N30,000 is yet to be paid to immediately proceed on industrial action,”

We have moved to a new domain – visit www.normtimes.wordpress.com for our daily news.

Thanks so much fans, due to some adventures, we’ve moved to a new domain (www.normtimes.wordpress.com). Visit Noble Reporters Media, NoRM Times Edition for more of our everyday news. Thanks.

While serving a sentence for murder, Joseph had already escaped twice from another prison, in Port-au-Prince, in 2010 and 2017.

Ganduje’s aide ‘locked up’ after comments on Buhari Gov’t.

Commissioner for Information in Kano, Alh. Tanko Yakasai confirmed the arrest of his son to journalists..

Abubakar III urged the bandits to always have the fear of God in their ways of life.